July 26, 2018 – This past weekend, the Mid-South Xball League (MSXL) held a record breaking tournament in Central Ohio. Today, the league is pleased to introduce Aaron Bennington, one of the most experienced and respected head referees, as President of the MSXL.

Aaron is known within the industry from his years refereeing events of Paintball Sports Promotions (PSP), National Xball League (NXL) and many other leagues in the continental United States, Latin America and Europe. Along with refereeing, he is currently studying international business and Spanish at Ohio Wesleyan University with plans to obtain a Master’s Degree in Business Administration (MBA) upon completion of his undergraduate. Highly regarded in the paintball industry, Aaron was an easy choice as President given his understanding of what the players want, his comprehension of running a successful paintball league, and his competency and ethics as a person are truly remarkable.

Kenny Schell, the previous owner of the MSXL, sincerely endorses Aaron Bennington as President of the MSXL:

After almost a decade at the helm of the MSXL, I am honored to leave the league in the hands of Aaron Bennington. I have known him for a number of years and have always been astonished of his ambition, drive, and work ethic. He is no stranger to the paintball community or the league. In fact, his tournament paintball career started with the MSXL. Aaron is at the pulse of tournament paintball. He has the passion and desire to take this league to greater levels that will benefit all teams and players. So please give him the support that I was so blessed to have.

I would like to thank all the officials, teams, players, and everyone else that has worked so hard to build the MSXL. I specifically want to thank Matthew Moakler who has been by my side in the trenches at every event, and Darin Tapp, for starting the MSXL and promoting the league to where it is today.

I close with the philosophy and mission I hold to this day, “There is no limit to what can be accomplished if it doesn’t matter who gets the credit.” In other words, all of us have to give a little bit of ourselves for the league so it can flourish.

Kenny would like to thank everyone for the time, memories and friendships he has gained throughout his experience with the MSXL.

Since the transition, the MSXL has provided additional media coverage for teams, a state of the art scoring system with new scoreboards and live scoring, and has continued bringing world-class referees to the tournaments. In 2019, the MSXL has the goal of providing the best regional tournament experience at an affordable price. 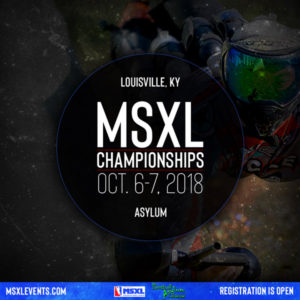